Smita and I pulled the kids out of school today to go see Obama at Michigan State. Leigh Wolf joined us… and frankly it was a long and tiring day: reaching campus at 9:30, standing in line till 11:30 and then 3 more hours of standing, waiting and waiting till Obama showed up… The kids managed to sneak up to the front row (we weren’t as shameless) and actually shake his hand! Pretty cool.

The best part is that both of them managed to get photographed by a Lansing State Journal photographer (while attempting to take a nap) and ended up on the LSJ website. Here’s the link to the photo and below is the actual photo itself. 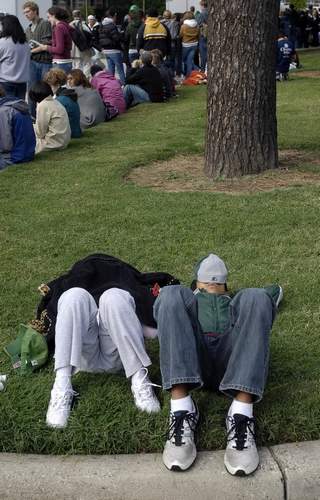 The description below the photo was as follows:
Shreya, left, 9, and Soham Mishra, 12, of Okemos,
try to nap while waiting in line with their mother and
father. The children’s father, Punya Mishra, called
in to their school saying it was “important that
they see the political process.”

You can see some more photographs by going to Leigh Wolf’s flickr set devoted to this. Specifically click here, and here and here.