I recently finished reading three books: A case of Two Cities by Qiu Xialong, A Wild Sheep Chase by Haruki Murakami, and Heavenly Date and Other Flirtations by Alexander McCall Smith. These are three very different books. The first two are novels and the third is a collection of short stories. Also, I have read other books by Xialong and Murakami (in fact I have blogged about one of them, the last book I had read by Murakami here) and this is the first book by McCall Smith that I have read (though I have been eying his series on The No. 1 Ladies’ Detective Agency for a while). Despite these differences, both in their content, and in my experience with the authors, all three books, in one way or the another, have to do with the joys and perils of translation – the process of movement from one place to another, of ideas and emotions, across individuals, nations and cultures. 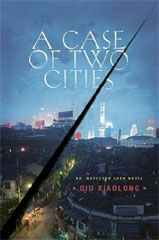 Etymologically, “translation” is a “carrying across” or “bringing across.” Translation in mathematics and physics is seen as a straightforward mechanical process (see Wikipedia page on translation here), a movement from one point in space to another (without rotation). In that sense, translation maintains the relationship between parts even while the whole is shifted. Translation in other contexts is more complicated. As Wikipedia says, “Translation is fraught with uncertainties.”

All three of these books deal with these uncertainties – though in very different ways. A Case of Two Cities by Qiu Xialong (this is the third book of his Inspector Chen series that I have read) often talks about translation literally. Inspector Chen is a Shanghai police officer by vocation and a poet and translator of English works into Chinese, by avocation, moves from China to the US in an attempt to solve a complicated case. Xiaolong paints a wonderfully vivid picture of today’s China, bursting with energy, breaking out of the shackles of the past, and yet, never really able to become truly free. The weight of a turbulent history is ever present. In Chen, we have a great protagonist, a poet and a cop, a rising star in the eyes of the Party, someone who seeks to understands the games he needs to play to advance, and yet is ambivalent to its rewards. He is faced, once in the US, with a series of moral quandaries, which he seeks to resolve, by writing a “translation” of T. S. Eliot’s Love Poem of Alfred J. Prufock! This is a competent book, not aiming too high, and meets both the requirements of the detective-story genre and yet manages to transcend them.

Murakami’s novels, though situated in Japan, are more akin to the hard-boiled novels of Raymond Chandler and Dashiell Hammett — and yet very different from them in many ways. In that sense A Wild Sheep Chase is a more complicated act of translation, of movement of literary styles across cultures and continents. And of course, as fans of Murakami know, the characters exist in a surreal world, both similar and distant from the one we live in. There are the familiar tropes, the disaffected, distant and idiosyncratic characters, the love of jazz and the treatment of everyday events as being strange and weird, while the most bizarre of events is treated the most matter of fact manner. Murakami plays havoc with the genre, maintaining its trappings and stylistic elements, even while breaking free of them. In many ways this was a difficult novel to read, and the least favorite of mine (among these three). That said, it is also a book that haunts you and for days after completing it, its tone and mood stayed with me.

And finally, in Heavenly Date and Other Flirtations, a collection of whimsical yet wise short stories, McCall Smith deals with love and relationships, and the contortions we undergo as we seek to map our thoughts and feelings onto another. This was in some ways the best book of the three, sensitive, insightful and heartbreaking. McCall does not miss a beat, though a couple of stories towards the end seem to try too hard. The short stories reminded me of Maugham (an author that McCall Smith has admitted to admiring). The stories capture the awkwardness and humor inherent in human interactions, as the characters twist and turn in attempting to understand each other. McCall Smith loves his characters and has a deep understanding of human nature. This is a book I would recommend to anybody in contrast to Xialong, who may not be everybody’s first love, and Murakami, who most surely, is an acquired taste.