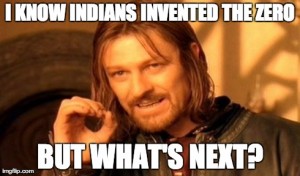 My friend Hartosh Bal (author of A Certain Ambiguity, a mathematical novel) has a piece in Caravan Magazine titled “Why Fields medalists are unlikely to emerge from the Indian educational system.” He mentions the fact that of the three winners of the Field’s medal (the highest accolade in mathematics) are Brazilian, Iranian and Canadian respectively. The Canadian, Manjul Bhargava, however is of Indian origin and, it appears that the Indian media have “rushed to claim him as India’s own.” As the title of his article suggests, Hartosh uses the fact that Bharghava was not educated in India, as a starting point for a broader discussion of how the manner in which mathematics is taught in India. He makes some wonderful points and I would recommend reading his entire piece.

The only quibble I have with his argument is that (as indicated by the title of my post) is that the problems he identifies with mathematics education are not limited to just India. Similar issues (such as an instrumental approach towards learning mathematics, focus on rote memorization of rules etc.) exist right here in the US as well. As Hartosh writes:

We believe students learn only at one pace, and even more damagingly in the case of mathematics, in only one way. Far too many parents in this country have told me about their children being penalised in tests for solving a mathematics problem by a method other than the one taught in the class. It should be quite the contrary, a student who correctly solves a problem by innovatively thinking her way to a solution deserves more marks rather than less.

I love that last sentence.

Imagine a school where a student would be given more points for solving a problem by a method other than the one taught! Where does that kind of an approach fit in a world dominated by Race to the Top and NCLB?

Hartosh also makes a crucial argument for the need to play with mathematical ideas.

But if a student is to enjoy mathematics, she has to be able to play with the material, use it to uncover something till then unknown to her, arrive at a truth she has never accessed before. It is only through this sense of play that an appreciation for the creative process that lies at the heart of mathematics begins to develop in a student. [italics mine]

Finally he quotes an interview with Manjul Bhargava, which speaks to the artistic, creative aspect of mathematics, that finds so little purchase or value today. Hartosh quotes from an interview Bhargava gave to the Times of India (incidentally another piece worth reading in full): Math teaching in India is robotic, make it creative

I always found the three subjects—music, poetry, and mathematics—very similar. In fact, I find that I think about them all in very similar ways. In school, mathematics is generally grouped in the ‘science’ category. But for mathematicians, mathematics—like music, poetry, or painting—is a creative art. All these arts involve—and indeed require—a certain creative fire. They all strive to express truths that cannot be expressed in ordinary everyday language. And they all strive towards beauty.

I found this quote particularly evocative specially in the context of the emphasis on STEM we are seeing so much of these days, where mathematics becomes an appendage to Science, Technology and Engineering. This is exactly the kind of instrumental thinking Hartosh (and Bhargava) argue against. Imagine what math class would look like it it were taught like art?