The math-po (and sci-po) stream keeps flowing. Math Mama Writes, who started the whole math-poetry movement has some more on her blog, and here is Erin Nash with some really beautiful biological poetry. And of course, here’s her husband Sean Nash having his students writing poetry too. Of course let’s not forget my daughter Shreya (who sort of started this whole thing) and her sci-po’s at her blog Uniquely Mine.

Below are some thoughts about math-poetry – but you can ignore all that and scroll right down to the poem: The infinity of primes!

Through all this I have been plugging away at my math poetry. I know the original challenge was to write something to motivate students to learn math (and I did write one along those lines). But more interesting to me has been this theme I have picked up, which is of writing proofs as poetry. I know many people have described mathematics in poetic terms but I am trying something slightly different here. I am trying to explain theorems (as in these couple of instances, see here, here, here and here) and specifically in the poem included below, I am actually trying to construct a mathematical proof in rhyming verse.

Sean Nash (of Nashworld and speaking in rhymes in biology class fame) in his post speaks of a step by step process that one follows when writing such poems. He writes of science but I think the same argument works for mathematics as well. One of the key things he writes is the value of summarizing, which I take to mean truly understanding something before you can translate it (in this case from prose to poetry). I am doing something similar here, where I take something written in mathematical language and translate it into rhyming verse.

The poem below was my attempt at writing a poetry version of Euclid’s proof that there are an infinite number of primes (see the actual mathematical proof). What was interesting was that I started writing the poem based on my recollection of the proof. Once I had a draft I went off and found some actual proofs to link to – and then while reading them, I realized that I had made some subtle but critical mistakes in my poem. [For instance here is a page that gets it right, and here is another that doesn’t.] Which meant that I had to go back to the editing table, and a few surgical strikes later, I had a poem that (at least to my eyes) is mathematically sound (its value as poetry is another matter altogether). As I was doing this, it struck me that this act of writing poetry actually helped me learn and understand this proof. I can’t wait to get back home and share this understanding with my kids. So this poetry has a educative component, not necessarily for the ones reading it (they may as well read the proof in its mathematical form, it isn’t that hard, it is shorter, and they don’t have to deal with my forced rhymes). But it did help me learn.

So this is a good example of how the process of constructing something (the act of design) can be as important, maybe more so, than the actual product that emerges. So the proof of the pudding is not necessarily in the eating but rather may lie in the cooking. But here the proof of the proof lies in the creating not in the reading, but I include the pudding (er… I mean poem) here anyway, for the record.

The infinity of primes

Over numbers and their combinations if you sit and mull
You will find that not one of them is uninteresting and dull.
But it is a certain class of figures that most attention stirs
Yes, I am speaking of those special ones, the prime numbers.

Prime numbers are interesting, the mathematician posits,
‘Cos they make up all the others, the so-called composites.
Here’s an imperfect analogy, a simple little working rule,
Consider the prime to be an atom, then a composite’s a molecule. To carry the chemical analogy completely out of bound,
Consider these atoms (primes) as randomly strewn around
Some here, others there, their patterns concealed
Few sequences stand out, no deep design is revealed.

As the ladder of digits you will climb
Hoping to predict the appearance of a prime
One fact stands out, above all else, as you stare
Prime numbers become more and more rare. 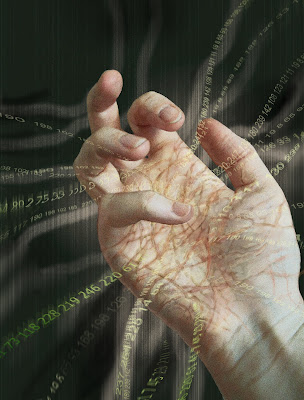 The solitude of primes
from View from Here Magazine

In other words, there are fewer primes the higher you go
Does this heightened rarity mean something, or no?
Is there a prime that is the biggest one?
If there is, finding it could be fun.

Of course, there’s another option, it is clear
Is it that primes get rarer but never disappear.
They get fewer and fewer the further we see
But they never really get done, on to infinity.

Which of these two options is the one that’s true
And how much arithmetic do you have to do
To show whether the primes are finite or not?
Ideally via a nice elegant proof, in one clean shot. Euclid, the geometry guy, comes to the rescue
And produced a cool little proof, whew!
So here’s my attempt to show in rhyme
There’s no such thing as the largest prime.
But don’t take my word for this information
Let us take a moment to look at Euclid’s creation.

Now here’s a critical (and smart) mathematical move
Euclid said, that in order the converse to prove,
Let’s start by assuming there is one (whatever it may be)
Let’s give it a name, this biggest prime, let’s call it p.
This largest prime, (p) when all is said and done
Is divisible just by itself and the number 1.

Now lets multiply together all these primes we have, then
We get a humungous number, we shall, for now, call N.
(This number we shall capitalize
To represent its rather large numerical size.)
Because N is the product of every prime we know,
It is divisible by every one of them, that’s easy to show.

Now take this N and to it, just add 1 (that’s all)
A difference that you may consider as insignificant and small.
But think about it for a moment and you may see
What a difference this addition makes to divisibility. Divisibility, Image from Math is fun

This new number N + 1 you will soon realize
In the case of divisibility can really surprise.
Take any number on our list including p, our largest prime.
N+1 is not divisible by any of these atoms of the number line.
Whichever way you put N+1 through the division blender
You will always be left behind with one solitary remainder!

Stay with us for a moment, we are almost done
In fact, this is where it gets to be kinda fun.
Notice, there are just two possibilities at this juncture
Let us, in turn, consider each conjecture. Fork on the road by Jessi Joy

Either N+1 is a prime, or it is not.
If it is a prime, our assumption is shot!
For N+1 is clearly
Much bigger than p!
Something that contradicts what we started with
The idea that p is the largest prime must be a myth

Or, it could be that N+1 is a number composite
Implying there are some primes that can cleanly divide it.
One thing for sure, this divisor cannot be
A prime in our original list we see.
‘cos we just showed that dividing N+1
By primes in the first list just cannot be done!

This just means, there are some primes we missed
When we were building our initial complete list.
And if we missed one, you can sure
There are just an infinity more.
Isn’t it time you said to me
Those magical words, QED.

To sum up, the finite prime set idea is pure fiction
Since assuming it leads to a contradiction.
Primes may be rarer and rarer the higher we go
But they do go on forever, and this Euclid did show.