Numbers are seen as being critical to developing our understanding of a subject. As Lord Kelvin, (1824-1907) said:

More succintly he said, “To measure is to know.” Numbers provide us (particularly academics) with credibility.

Of course this dependence on mathematics and numbers can often be misplaced. I am always impressed how we use numbers mindlessly – sometimes to levels of accuracy that don’t really convey much. I was reminded of this while reading a recent NYTimes article A Deluge of Data Shapes a New Era in Computing.

In this article, the author attempts to explain the size of one petabyte of data. They say that,

A petabyte of data is roughly equivalent to 799 million copies of the novel “Moby Dick.”

It was the 799 that caught my eye. Why 799? Do we know for sure that 798 million would be completely off base? Wouldn’t 800 be better – at least from the point of view of being easier to remember. Where did that number come from anyway? I spent a bit of time trying to recalculate it and depending on the kinds of approximations I made, and the assumptions about the size of Moby Dick I kept coming up with somewhat different answers. Now others have tried to explain the size of a petabyte with different analogies. Here is one, and another.

But the point I am trying to make here is not as much about calculating a petabyte but rather about how we often thoughtlessly assign specific numbers where such specificity is not warranted. I captured a great example of this in an elevator in India. Take a look at this picture. 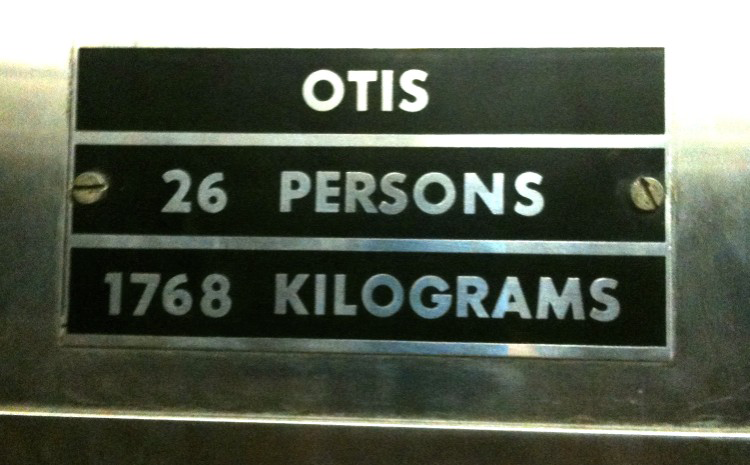 What struck me, when I walked into this elevator were the precise weight that this elevator could carry, 1768 kilograms!! Where did this number come from? A bit of backward calculation reveals that 1768 is 26 (the maximum number of people the elevator could carry) times 68. Of course this bit of back-calculation doesn’t answer anything. The source of these numbers is still a mystery. I guess the assumption is that an average person weighs 68 kg. How valid is that? What if there were 25 people who weighed 68 kg and one who weighed 69 getting into this elevator? Would the whole system go kaput? Would it not have been safer to go with 70 kilograms as being the average weight? That would give us some margin here just in case. Providing some margin for error maybe important given that people don’t usually read these signs. And if there is an error margin, why this weirdly specific maximum weight restriction, 1768?

What these two examples have in common, in my mind, have to do with how we make approximations, rounding up, rounding down, only to end up with highly specific numbers which are quite fictional in their accuracy!! Hmmm….

Of course this is no way negates the importance of numbers in our lives. Numbers as Lord Kelvin said, ensure that we know something about the topic at hand. Support for his position comes from an unlikely source, the author Samuel Beckett (of Waiting for Godot fame). Here is a quote from his novel Molloy which to me is just a perfect example of how mathematics can help us understand phenomena that on the surface seem quite incomprehensible. And it is hilarious to boot (and also explains the use of the word flatulence in the title of this post). Enjoy:

I can’t help it, gas escapes from my fundament on the least pretext, it’s hard not to mention it now and then, however great my distaste. Three hundred and fifteen farts in nineteen hours, or an average of over sixteen farts an hour. After all it’s not excessive. Four farts every fifteen minutes. It’s nothing. Not even one fart every four minutes. It’s unbelievable. Damn it, I hardly fart at all, I should never have mentioned it. Extraordinary how mathematics can help you to know yourself.

I don’t think any scientist could have said it better!