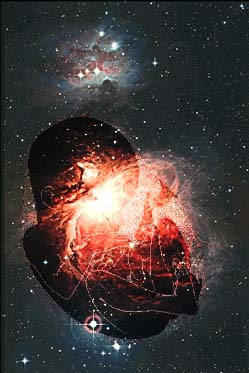 A few weeks ago, Smita (my wife) and I found out that we were going to have a baby–our first. I am not sure we still quite understand what this means, but as a friend said, we have a lifetime to get used to it. Not that the news came as a total surprise, we had been planning for it–but actually seeing the pink “plus” sign appear on the little contraption that tests pregnancy was something else. As you can imagine lots of things changed overnight, some big changes and lots of small ones.

I watch Smita, my wife, and see her body change, her moods fluctuate and I see a beautiful intricate process unfold. I see her body and mind adjusting itself to this new being, this new piece of life growing in her. I sit here, awestruck by this perfect piece of fine-tuned, fragile yet dynamically stable confluence of biological forces at work. One cannot but be amazed by its mystery and majesty–not to be awed by four billion years of evolution playing itself out in an individual. I am reminded of something Jacob Bronowski looking at his first daughter when she was four of five days old, and thinking, “These marvelous fingers, every joint so perfect, down to the finger nails. I could not have designed that detail in a million years.” But he goes on to say, “But of course it is exactly a million years that it took me, a million years that it took mankind…”

There are those that feel that seeing ourselves as being evolved beings somehow precludes this sense of mystery, that somehow knowing the brute mechanisms of blind evolution (in Tennyson’s famous words “Nature red in tooth and claw”) is demeaning and degrading. That somehow the mystery- the connection to the unity of the world is lost. I have been an agnostic (with periods of being an atheist) almost as long as I remember, but this idea of knowledge (specifically scientific knowledge) as robbing us of contact with mystery never really made sense to me. I have never had to go out and look for mysteries–they are all around us. And this feeling of unity with the world lies at every corner.

This mystery and unity with the world is there in the chanting of hymns by monks, in the Muezzin’s call to prayer, in understanding that each and every object in the universe attracts each and every other object with a force that is proportional to the product of their masses and inversely proportional to the square of the distance between them; in the way a smile can carry warmth and friendship across a crowded room, in understanding that each and every one of us is a robot controlled by a long molecule called DNA, that around one percent of TV snow (the stuff you see when no channel is on) is background radiation from the big bang; in understanding that the clumsy (often hilariously so) act of sex can lead to the this beautiful birth of new life. There is beauty and unity in all these things–things that are all around us, but sadly things we tend to ignore in our mad, rushed lives.

I look at Smita, and I put my hand on her stomach, trying to sense the little tadpole sized piece of life in there, trying to call, trying to convey these feelings I have. There is a joy so deep, so profound, that it can be felt only as an ache. There is a sense of connection so fundamental that maybe poetry is the only way one can express it and I am no poet. Whitman said, “A blade of grass is the journey-work of the stars.” and William Blake said:

To see the world in a grain of sand
The heavens in a wild flower
To hold infinity in the palm of your hand
And eternity in an hour.

Being human comes with certain built in disadvantages, one of which is that we have no idea of what lies in the future, while we can spin intricate stories of possible worlds. Sitting here typing on the keyboard, I see a new stage in life in front of us, maybe more appropriately a new life waiting to be lived and fulfilled. It is moments like this where the world awaits to unfold, and there is fear and mystery as well as anticipation–and most of all a sense of continuity and unity.